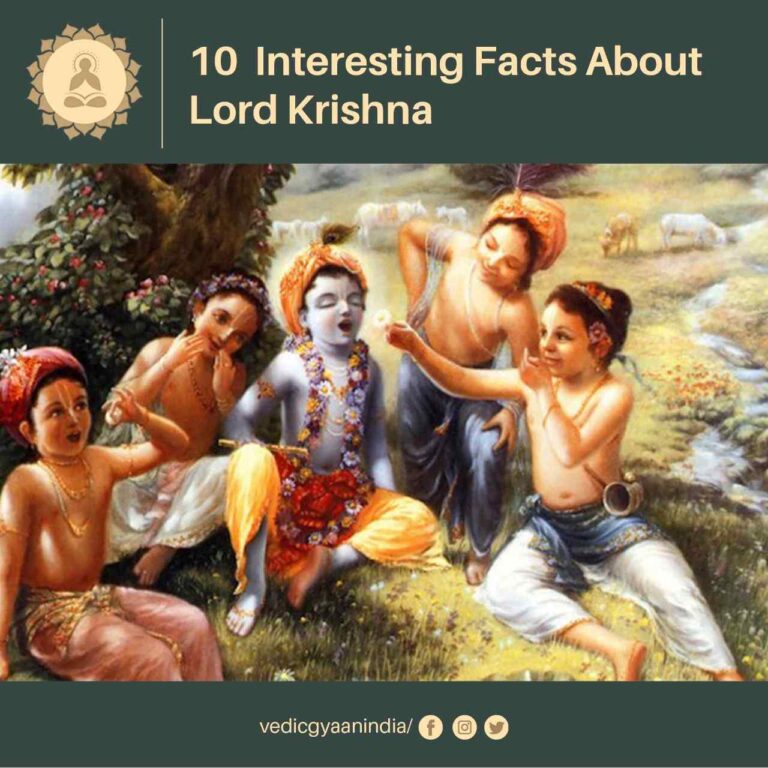 Bhagwan Shri Krishna is the eighth avatar of Lord Vishnu and is one of the major deities in Sanatan Dharma. A great exponent of the holy book Bhagavad Gita, Shri Krishna is one of the most powerful and charismatic incarnations of Vishnu. He is worshipped and loved by the masses around the world. Shri Krishna was dark in complexion with really prepossessing looks. The name “Krishna” originates from the Sanskrit word Krsna, which primarily means black, dark, and attractive.

Here are some interesting facts about Lord Krishna

1.Lord Krishna was born in prison

He was born in a prison of Mathura in Rohini Nakshatra, as the eighth son of Devki and Vasudeva. His maternal uncle Kansa wanted him dead after he came to know that the eighth child of his sister will kill him. Krishna escaped death as his father took him to safety in Nanda village.

Great sage Sandapani was the Guru of Shri Krishna. Both the brothers, Shri Krishna and Balarama gained their knowledge while staying at the residence of Sandipani Muni. Shri Krishna brought back the son of his guru as Guru Dakshina, who disappeared in the ocean after getting abducted by the demon Sankhasura (Conch Demon).

All of the 16,100 women were captivated by the divine magnificence of Lord Krishna, and everyone committed themselves that they would either marry Krishna or commit suicide. So, Shri Krishna married them to restore their honor and raise their status in the society to queen. Thus, Shri Krishna had 16108 wives in Total.

Lord Krishna had a total of eighty sons, 10 sons each from his eight primary wives (Ashtabharya). The most popular of them were: Pradyumna from Rukmini: Samba from Jambavati who got cursed by sages after he played a prank on Sages. Samba became the reason that the Yadu clan demolished.

5.Who all heard Bhagavad Gita

Apart from Arjuna, Lord Hanuman and Sanjaya heard the narration of Bhagavad Gita from Shri Krishna. Lord Hanumana sat on top of Arjuna’s Chariot throughout the battle of Kurukshetra and Sanjay had a boon given by Ved Vyasa to narrate the events of the battle of Mahabharata to King Dhritarashtra.

After losing her children, Gandhari cursed lord to served two purposes. The early avatar of Lord Krishna as Lord Rama killed Bali and assured his widow Tara that Bali will take his revenge in his next birth. Bali reborn as hunter Jara, and in this life, he was the one to kill Shri Krishna with a simple arrow.

8.The relation between Lord Krishna, Arjuna, and, Karana in Past Life

Lord Krishna and Arjuna were twin brothers in their past life named Narayana (Krishna) and Nara (Arjuna) who were born to Kill a Demon Dambhodbhav (Saharsrakavacha), reincarnated as Karna during the Dwapara Yuga. This event took place during the end of Treta Yuga.

Ekalavya was Krishna’s cousin. He was the son of Devashrava and brother of Vasudeva, who got lost in the forest and was later found by a Nishada named Hiranyadhanu. Ekalavya was killed by Lord Krishna in battle while protecting his father during Rukmini’s Swayamvar.

Ekalavya got a boon from Lord Krishna after his great sacrifice of Gurudakshina that he would be soon incarnated and take revenge on Guru Drona. He later took birth as Dhristadyumna.

10.His relation with the Pandavas

Pandavas were related to Shri Krishna through their Mother. Kunti (Pandava’s mother) was the sister of Vasudeva (father of Shri Krishna) which means Pandavas and Shri Krishna were cousins.