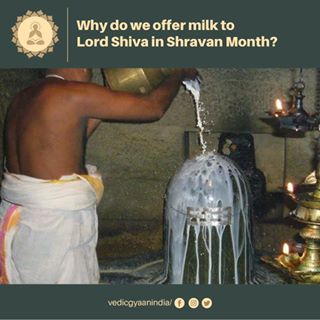 Why do we offer milk to Shiva linga?

In Sanatan Dharm, Shiva has many names. Soma is one of the most important names, which means intoxication. Lord Shiva drank poison emanating from the Samundra Manthan (Churning of the oceans).

Thus, It is a tradition to offer everything poisonous to Lord Shiva. Due to which, Hindus offer milk to the Shivlinga during the Shravan month. According to Ayurveda, milk is poisonous during this month.

There are different compositions which are defined as three Doshas or Prakruti:

Balance of all three Prakruti is necessary for the smooth functioning of our body. Disbalance of these natural compositions can lead to various illnesses.

During the month of Shravan month, the Vata doshas of a person rise. A person should avoid food that increases Vata Doshas during this period. For example, green leafy vegetables contain a higher amount of Vata components in them. Due to which people should avoid green vegetables during the rainy season to avoid illness caused due to excess of Vata Components. During the rainy season, cattle like cow also eat lots of green leaves and grass which lead to increase in Vata component in their milk, making it harmful to drink as it can cause many ailments. This is the main reason drinking milk during the Shravan month is considered harmful, according to Ayurveda.

Offering milk to Shiva linga is a wastage of milk?

Some critics often complain against Hindu by asking “Why do Hindus waste so much milk by offering it to shiv linga during the month of Shravan, instead of feeding thousands of poor people.

In Hinduism, it is believed “Feed to others only what you can eat for yourself (Which means, do not offer to others what you will never consume), always give the best to others and do welfare for all. Always take care of the poor and feed them the fresh and healthy food”.

Feeding poor and needy with milk and green vegetables which is poisonous during Shravan month is a sin, as it may cause them illness and diseases.

Sanatan Dharma is a spiritual philosophy and a way of living. Science is something inherent to its Vedas and other spiritual writings.

According to “Shiva Agamas” the Sacred Literature Of Saivism, it is called Abhishekam. Shiva Agamas give a lot of importance to Abhishekam in Shiva pooja making the ceremony many times more effective. You may perform Abhishekam by simply using holy water or perform elaborately with milk, curds, honey, ghee, sugar, coconut water, holy ash, sandal paste, fruit juice, etc. Abhishekam is the offering of ablutions to an energized deity. Water, being an electrolyte, transmits energy much faster than air.

Pouring water upon an energized deity releases powerful vibrations that we can pick up more easily than from the air. Similarly, different substances can release different vibrations when they come in contact with an energized object or deity. Many of these substances are edible, and each one has a unique quality that heals or energizes a specific body part. This is the science behind Abhishekam. It is devotee’s faith that the process of bathing with the prescribed eleven ingredients like water, milk, curd, ghee, honey, etc. makes Lord Shiva happy.

Thus, offering milk to Lord Shiva has a more intended meaning than just a spiritual practice. We offer intoxication to the supreme Lord Shiva and he intakes all the negative aspects of the source of harmful toxins. The Atharva Veda has significantly described the scientific reasons behind this spiritual practice.