Vedic Gyaan Supreme Power of Knowledge
Home Blogs Sanatan Stories Who were Arjuna and Karna in their previous life? 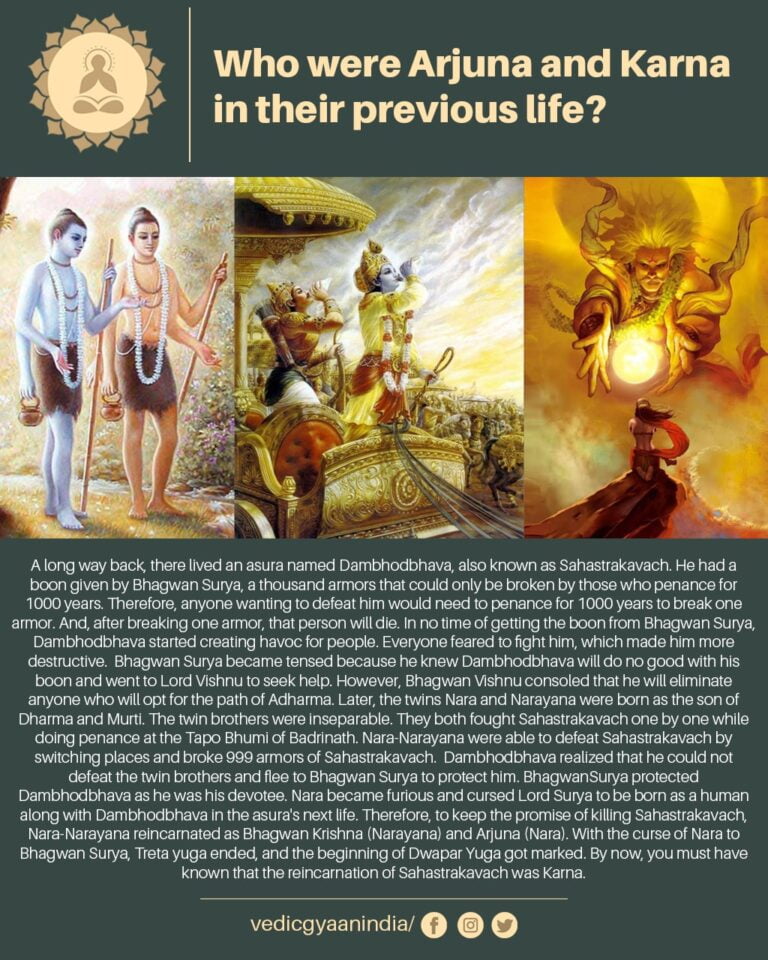 The Sanatana epic, Mahabharata, identifies Lord Krishna as Narayana, but do you know who Arjuna and Karna were in their previous lives? In the Bhagavata Puran, a story of Nara-Narayana has its mention where Nar and Narayana are the twin incarnations of Lord Vishnu. They took birth to preserve the righteousness on the earth. In the great epic of Mahabharata, the vital role in the war was of Arjuna, who was Nara in his previous life with Lord Krishna as Narayana.

You might know about Arjuna as Nara, but who was Karna? And, why was he born with armor? The word Nar means Human, and Narayana means Bhagwan (God). Dharma (son of Brahma) and Murti (daughter of Prajapati Daksha) were the parents of twin sons. And, Nar-Narayana has their depiction jointly as well as separately.

The Story of Nara and Narayana

According to the story, a long way back, there lived an asura named Dambhodbhava. He wanted to become immortal and started praying to the Sun god (Surya). Bhagwan Surya got pleased with his prayers and appeared in front of him. Dambhodbhava as, he wanted, asked the god to make him immortal. However, Surya god could not fulfill this wish.

Lord Surya fell into his clever request and fulfilled his wish. Now, Dambhodbhava was no less than an immortal being. Also, defeating his armor became not less than impossible. After fulfilling his request, Lord Surya became tensed because he knew Dambhodbhava will do no good with his boon and went to Lord Vishnu to seek help. However, Lord Vishnu consoled that he will eliminate anyone who will opt for the path of Adharma.

In no time of getting the boon from Lord Surya, Dambhodbhava started creating havoc for people. Everyone feared to fight him, which made him more destructive. Soon people start calling him, Sahastrakavach (one with thousand armors). Around this time, King Daksha married his daughter to Dharma, one of the Manas Putras of Brahma. Murti knew about Sahastrakavach and prayed to Lord Vishnu to help people. Lord Vishnu got pleased, and Murti gave birth to not one but twin sons, Nar-Narayana.

The twin brothers were inseparable. The thoughts in one’s mind get completed by the other one. Time went by, the time Sahastrakavach was killing people near the forest of Badrinath where Nara-Narayana were staying, Narayana went on a one-on-one fight with Sahastrakavach while Nara was meditating at Badrinath on behalf of Narayana.

When Sahastrakavach saw Narayan’s eyes, he feared for the first time by the calmness his eyes hold. He knew that Narayana was not ordinary, having possessed immense power to defeat him. Dambhodbhava and Narayana started fighting. Narayana was able to break the first armor of Sahastrakavach but died after the armor broke into pieces. Nara came running to the rescue of Narayan. With his meditation, Nara had successfully pleased Lord Shiva and earned Maha Mritunjay Mantra, using which he resurrected Narayana. Sahastrakavach became scared because he knew there were two people with the same soul.

Now, it was Nara who fought with Sahastrakavach while Narayana meditated at Badrinath. The Badrinath temple marks as a Tapo Bhumi, where one year of penance equals 1000 years of meditation. Due to which Nara-Narayana was able to defeat Sahastrakavach by meditating there.

The twin brothers kept on fighting by switching places and broke 999 armors of Sahastrakavach. By then, Dambhodbhava realized that he could not defeat the twin brothers and flee to Lord Surya to protect him.

Lord Surya protected Dambhodbhava as he was his devotee. Nara became furious and cursed Lord Surya to be born as a human along with Dambhodbhava in the asura’s next life. Sun god accepted the curse for his devotee. Therefore, to keep the promise of killing Sahastrakavach, Nara-Narayana reincarnated as Lord Krishna (Narayana) and Arjuna (Nara). With the curse of Nara to Lord Surya, Treta yuga ended, and the beginning of Dwapar Yuga got marked.

By now, you must have known that the reincarnation of Sahastrakavach was Karna. As per the boon of Lord Surya, Karna was born with armor attached to his body. The sinful acts that Dambhodbhava did in his entire life made him suffer as Karna, and he joined Duryodhana in his evil deeds. His destiny was to join hands with Adharma being the reincarnation of Asura Dambhodbhava, but the Ansh of Lord Surya in him made him immensely powerful, brave, and charitable. However, with the armor on, Arjuna could not defeat Karna.

Lord Krishna asked Lord Indra (father of Arjuna) to disguise himself as a saint and ask Karna’s armor in charity. Due to God Surya’s qualities in him, Karna parted from his last armor. His action bought him long-lasting fame. Thus, Pandavas apologized to Kunti and Lord Krishna for lamenting them after knowing the truth behind Karna’s previous life.

The epic Mahabharata has instances of Lord Krishna reminiscing Arjuna about his previous life as Nara. And, he also made him realize that his purpose in the present life was to kill Sahastrakavach, reincarnated as Karna.

I bow down to Lord Krishna, Narayana himself and his friend Arjun and the goddess Saraswati who has graced us by revealing the secrets of the Mahabharat and the writer Vyasa. By destroying all the negativities, one should start the chanting of the epic of Mahabharat.