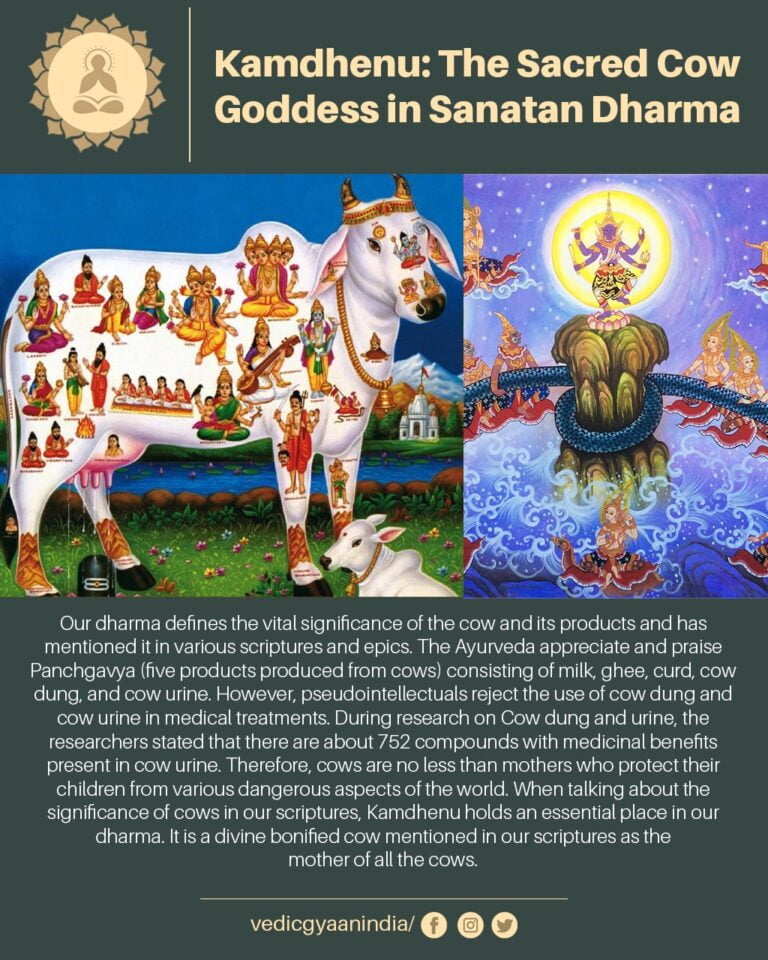 India is a country that has never considered a cow as an animal but as a mother. Our Rishi Munis have mentioned the cow as a mother of the world because they feed a big part of the population.

A cow is the mother of the world.

Our dharma defines the vital significance of the cow and its products and has mentioned it in various scriptures and epics. The Ayurveda appreciate and praise Panchgavya (five products produced from cows) consisting of milk, ghee, curd, cow dung, and cow urine. However, pseudointellectuals reject the use of cow dung and cow urine in medical treatments. During research on Cow dung and urine, the researchers stated that there are about 752 compounds with medicinal benefits present in cow urine. Therefore, cows are no less than mothers who protect their children from various dangerous aspects of the world.

When talking about the significance of cows in our scriptures, Kamdhenu holds an essential place in our dharma. It is a divine bonified cow mentioned in our scriptures as the mother of all the cows.

The verses stated above have their relation to Lord Indra, who prayed to the sacred cow. Our Sanatan Dharma state Gau Mata as the supreme symbol of purity belonging to everyone. The word Kamdhenu comes from the Sanskrit word ‘Kamaduha,’ which means “the cow of plenty.” She is the one who fulfills all the desires. As per the dharmic story, the Kamdhenu cow is mother of the Rudras.

The emergence of Kamdhenu

The Adi Parva (Mahabharata) stated the emergence of Kamdhenu from Samudra Manthan. Therefore, she is an offspring of Devatas and the Asuras. Later, the Saptarishis became its keeper when gifted to them. Brahma made an official order that she will provide ghee and milk for special Yagnas (spiritual sacrifices).

The story narrated in the Ramayana epic states Surabhi is born as a daughter to Rishi Kashyapa and Krodhavasa. And, her daughter Rohini and Gandharva have symbolism as the mother of cows and horses.

According to the Puranas, Surabhi was the daughter of Prajapati Daksh and got married to Rishi Kashyapa. Surabhi gets denoted as the mother of all cows and buffaloes.

The Matsya Purana has two conflicting mentionings of Surabhi. Firstly, it describes her as the wife of Lord Brahma. Also, their union gave birth to Yogeshwari (mother of Quadpeds). Secondly, it described Surabhi as the daughter of Prajapati Daksh and got married to Rishi Kashyapa.

The Devi Purana describes the emergence of Surabhi when Lord Krishna and Radha felt thirsty for milk and created Surabhi and her calf Manoratha from the left side of his body. Lord Krishna worshipped Surabhi, decreeing her as the milk and prosperity giver. From then, people worship Surabhi in the form of a cow on Diwali on Balipratipada day.

In the verses of Bhagavad Gita, Lord Krishna mentions Surabhi as Kamdhuka twice in verses 3.10 and 10.28

Prosper in the performance of these duties (sacrifices) shall get upon all you wish to achieve.

Lord Krishna said for doing one’s duty, get the milk of all desires.

I am the Vajra (thunderbolt) amongst weapons and Kamadhuka amongst the cows. I am Kaamdev, the god of love, amongst all causes for procreation; amongst serpents, I am Vasuki.

Lord Krishna, when describing himself to Arjuna said, he is Surabhi among the cows.

Several other references mention Surabhi as the mother of the Rudras, Rishi Kashyapa being the father. The Udayoga Parva book of Mahabharata described the emergence of Surabhi when Lord Brahma drank too much of Amrit that he puked some of it from which emerged Kamdhuka.