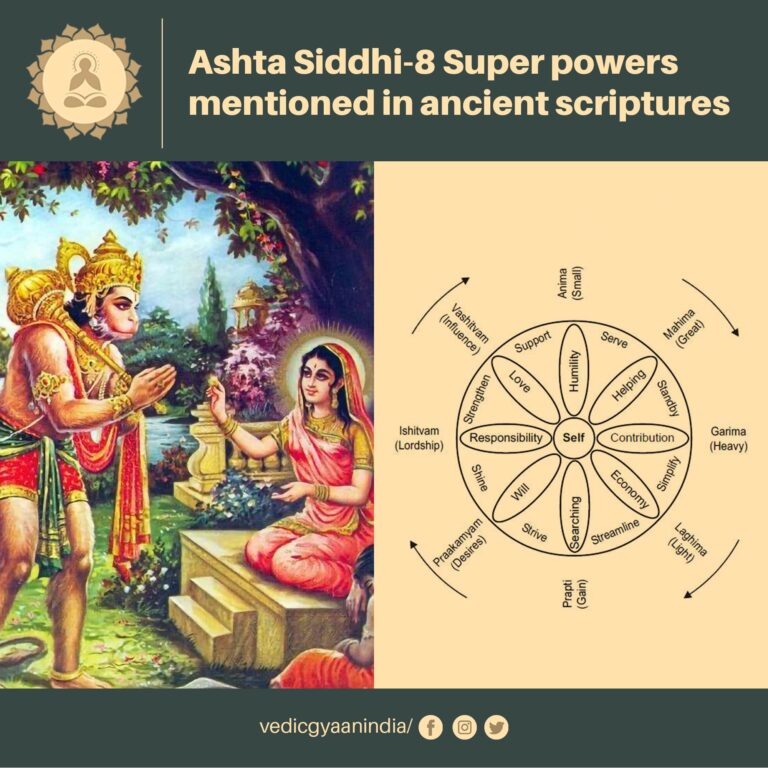 There are 8 siddhis mentioned in our ancient scriptures, also known as Ashta Siddhi. The Scriptures also include the abilities gained by the seeker after the attainment of the Ashta Siddhis. The seeker needs to be very disciplined and learn to control the mind as it is not so easy to attain these siddhis. After attaining siddhis, the seeker rises above worldly attachment. Longing for desires of the materialistic world ends. It is said in the scriptures that Mata Sita blessed Lord Hanuman. He can grant anyone with Ashta siddhis and nine Nidhis. The lines from Hanuman Chalisa that describes the above are as follows:

Siddhis are spiritual and supernatural powers and abilities attained by deep spiritual Sadhanas, including Yoga and Meditation.

What are the Ashta Siddhis?

Anima: The ability to make oneself subtle is called anima. By attaining this Siddhi, a person can turn extremely small. The person is capable of holding a body similar to an atom.

Mahima: The second Siddhi is Mahima. After attaining this Siddhi, man can make himself infinitely huge. He can stretch his body to any extent. At the same time, he can also expand nature.

Garima: The third Siddhi is Garima. After attaining Siddhi height of the person remains limited, but the bodyweight increases to an extent, no one can move it. Just like when the powerful Pandava, Bhima, was unable to move the tail of Hanuman Ji.

Laghima: The fourth Siddhi is Laghima. After attaining this Siddhi, one’s body becomes very light that it can fly faster than the air. The weight of his body becomes minimal.

Prapti: The Prapti Siddhi gives the seeker the ability to reach any place in the universe according to his will.

Prakamya: The sixth Siddhi is Prakamya Siddhi. After attaining this Siddhi, a person can know and understand what is on one’s mind. He can tell what is on the other person’s mind, whether he speaks or not.

Ishitva: The seventh Siddhi is Ishatva, and it means hegemony. It is the title of God. After attaining this Siddhi, the person stands in the category of God.

Vashitva: The eighth Siddhi is Vashitva. After attaining this Siddhi, a seeker can subdue any person or thing. Whether it is an animal, a bird, or a human being, he can defeat anyone.

Several ways are mentioned by acharya Patanjali in his Yoga Sutra to attain supernatural powers. Some of the ways to achieve Siddhis are as follows:

Janma ( by birth): A newborn whose parents attain high spirituality, attain Siddhi just by residing in the womb. Moreover, the child can achieve Siddhi faster in comparison to others.

Aushadhi (Medicines): With some medicines and herbs help, you can get supernatural powers and abilities.

Mantra (incantation): Chanting hymns with proper pronunciation can help you in achieving special abilities. The mantras possess powers to enhance your physical and mental capabilities.

Tapah (Austerity): When you avoid conflicts and distractions of the mind, your body starts formulating self-discipline. It will help in controlling the five elements that help in achieving Siddhi.

Samadhi (one with consciousness): The ultimate way of achieving Siddhi is through Samadhi. The body becomes one with nature while having consciousness. The person is Siddh and has the power to leave their body whenever they want.