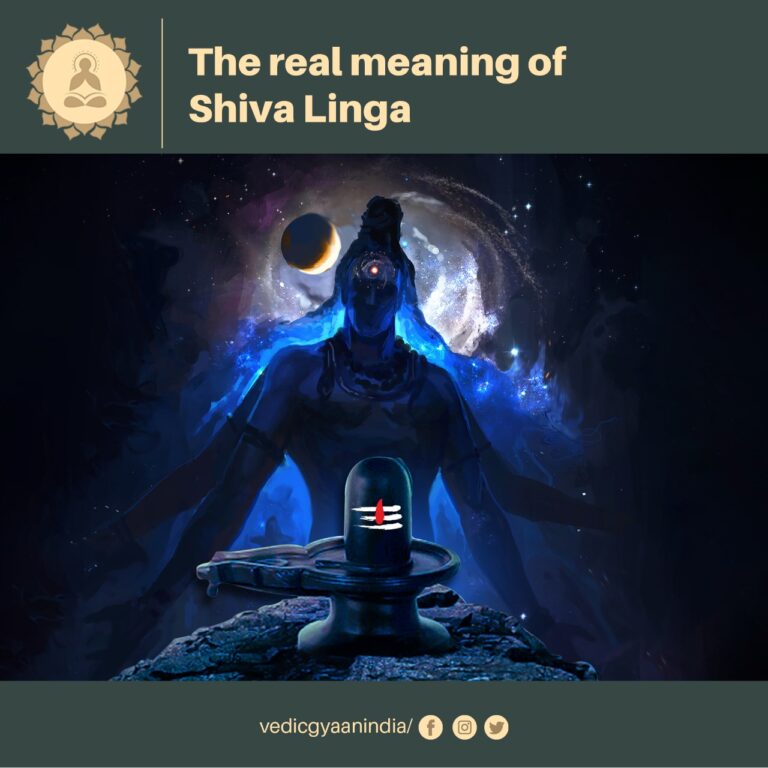 The Internet has become an active source of false and manipulated content. You must be aware of the knowledge you seek. Many people have misunderstood the real meaning of linga in ‘Shiva Linga.’ The western world has compared linga to a sex organ many times. But, the word linga consists of a deeper meaning.

The word ‘linga’ in Sanskrit means symbol (chinha). Moreover, the Agama text explains by breaking the literal meaning into two primary pieces where ‘ling’ means to dissolve or destroy whereas ‘ga’ means to emerge or create. The intended meaning is that we all are creations of Lord Shiva (universe), and at the end, we all dissolve back into him. Thus, Shiva Linga marks the cosmos of our universe.

Now, you know the real meaning of Shiva Linga. Further, you must be wondering what does the linga symbolizes. To answer this part of your question, we may move on to a story.

Once, a sculptor had to create a sculpture of the god from a rock. He got puzzled because god belongs to everyone. He did not want to portray the god similar to a specific creature. Therefore, he kept the rock formless. This formless creation of god’s idol symbolizing the infinity of the universe is linga. Linga defines the universe and everything within the universe.

To clarify, the crucial motive of this story is to explain to you that god is formless. Our modern science has proven that our whole world emerged from nothingness and will dissolve in it. The form and creation of something lie inside this nothingness.

The linga in itself defines a universe of nothingness. Depending upon our minds and visualization, we have created something having a form. God is formless. Our ability to visualize and create has given shape to our god.

The story revolves around a debate that occurred between Lord Vishnu and Lord Brahma regarding superiority as an individual. They went on to have an endless quarrel when a wall of fire emerged between them. Brahma went up to measure the end of the wall in the form of a swan. On the other hand, Lord Vishnu became a boar to measure the dead-end by digging underground.

They both kept on exploring the ends of the wall but were unable to find it. Disappointed by their failure, both returned. While Lord Vishnu accepted his defeat in reaching the end of the wall, Brahma lied, boasting that he found Keiki flowers at the top of the wall.

The lies of Brahma went on to burst open the wall of fire. A divine figure came out of the wall cursing Brahma for his impatient lies and ignorance. He was Lord Shiva. After that day, the practice of worshipping the stone pillar as a piece of Shaligram stone started. It is linga or Shiva linga.

Moreover, it reminds a symbolic container of ideas and reality ahead of our senses. The belief extends to the worshipping of a formless linga that can break us free from the walls of perceptions and divisions like gender, status, inequality, lineage, etc.

There are several facts related to the shiva linga. Some of these facts are as follows:

Nonetheless, the Matsya Purana (Chap. 165-169) states that drinking water from the river Ganga and worshipping the lingam may bring freedom from all states of grievance.