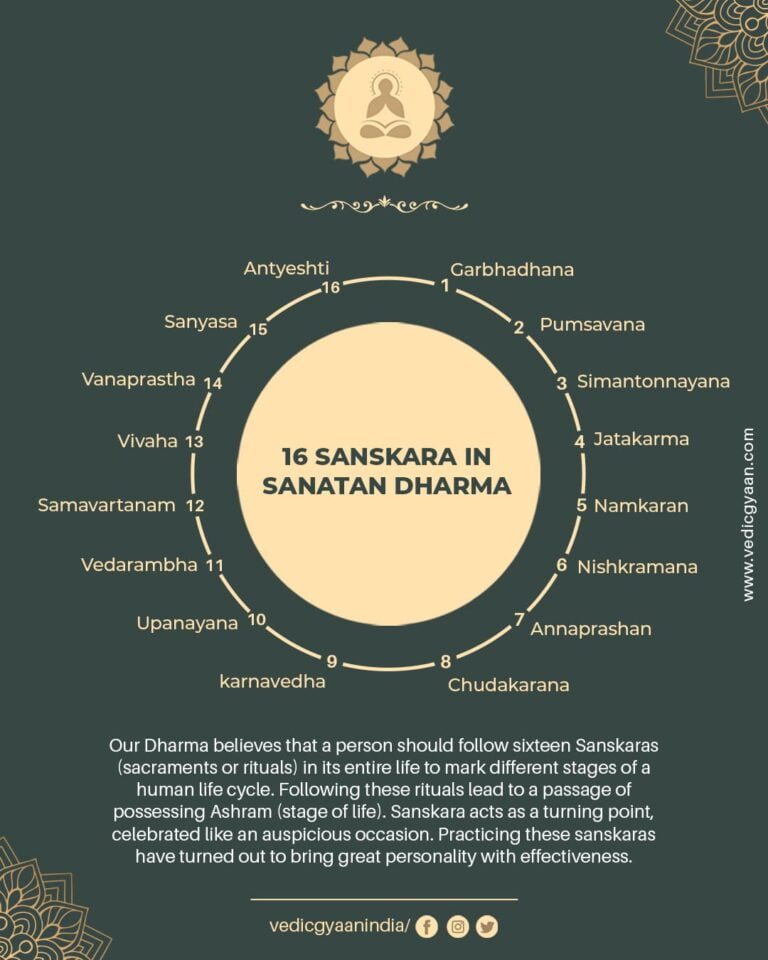 Our Dharma believes that a person should follow sixteen sanskaras (sacraments or rituals) in its entire life to mark different stages of a human life cycle. Following these rituals lead to a passage of possessing Ashram (stage of life). Sanskara acts as a turning point, celebrated like an auspicious occasion. Practicing these sanskaras have turned out to bring great personality with effectiveness. The 16 Sanskars mentioned in our Vedic Dharma have their significance mention below:

Garbhadhana is the first Sanskara from the 16 Sanskaras in the Sanatan Dharma. Garbhadhana consists of two Sanskrit words, Garbha (Womb) and Dhana (Attain, Wealth). The word “Garbhadhana” literally means Attaining the wealth of Womb. It is the foremost Sanskar followed to pray for a child and its well-being. As parents, one beholds a responsibility towards the child and its requirements. Garbhadhan Puja laid following the ways mentioned in the shastras for fulfilling a child’s duty. If the Conceiving happens when the mind, body, and soul are happy, they result in a healthy and intelligent child.

The Pumsavana is the second Sanskar, performed in the third or fourth month of conception by the family members. There are different diverse traditions for this rite. Mainly, a yajna performed while reciting the Vedic hymns and prayer for a healthy baby. The purpose of this ritual is to have healthy and good progeny. The possibilities increase if the conception takes place according to the position of the planets. The food and diet of the mother are also maintained.

Simantonayana Sanskaar gets often performed in the seventh month of pregnancy. Prayers conduct to offer well being of the child and mother. And the developing child’s physical and mental growth. Puja helps in purifying the environment and bringing peace to the pregnant mother. A mother’s good thought is essential for giving birth to a peaceful and holy child. A pregnant woman needs to develop positive changes in her lifestyle, eating, exercise, sleeping, etc. There are possibilities of a miscarriage or premature delivery during these months. Medical science also advises women to take special care during these months.

Jatakarma Sanskar gets performed on the sixth day of a child’s birth. It helps in the purification of the atmosphere in the house to give healthy air to the child. Family members pray to goddess Shashti (protector of children) for keeping the child safe from physical and mental problems. The father welcomes the baby by feeding the baby’s lips with honey and ghee. It fastens the healthy growth of the child. After that, the mother starts to breastfeed the baby. Mother’s milk is considered best for the child during this period.

Namkaran is an auspicious ritual in which the father whispers his name in the baby’s ear. This Sanskar gets performed between 11 to 45 days of birth. The first letter of the name generates according to the Hora Shastra. And the name-giving ceremony is performed following the planetary positions and Nakshatra in the kundalini of the newborn.

In this rite, the child gets exposed to the light of the Sun and Moon for the first time. Nishkarmana, performed in the fourth month of birth. From this day, the child starts getting exposed to the external environment. The infant is made aware of the surrounding.

Annaprashan Sanskar performed on the sixth month of the child. The child consumes solid food. The food gets marked with various gods and goddesses before giving it to the child. Sweet porridge or soft rice becomes a commonly used meal for the child.

This Sanskar is the first hair removal from the baby’s head. The ceremony should be held on an auspicious day a year later than birth. This ritual helps to build strength, enhance understanding and extend the life of the child. The removed hair gets disposed of in a sacred place. No one to find Brahman spells to extend the healthy life of the child.

The Sanskar holds piercing in the ears of the child in the third or fifth year. With the beginning of the Surya Puja. The basis of this ritual is scientific. Its primary purpose is to protect the child from physical ailments.

This sanskara takes place only for boys. Upanayana is the ritual of wearing a sacred thread called Yajnopaveetam or Janeau. When a child is seven years old, the janeau sacred thread, carried solemnly. Sanskar is the child’s second birth-the spiritual birth. The study of all rituals and Vedas begins with the guru.

Sanskar performed in conjunction with Upanayana. Vedarambha, the study of the Vedas and Upanishads in ‘Gurukula’ or ‘Pathashala.’ The beginning of each academic semester, there is a ceremony called Upakarm. At the end of each academic semester, there is another ceremony called Upasarjana. The child begins his journey on the path to spiritual life. It has contrast to a life of eating, sleeping, and procreation in which animals also live.

Samavartanam is the ceremony related to the end of the formal education of the Vedas in ‘Gurukul.’ After learning the rules of life, the boy returns home from his master’s Ashram, the first brahmacharya Ashram. He is now eligible to enter the household level and is considered a man qualified for marriage.

This sanskara is the entrance to the second Ashram. Life as a sole family begins. Hindu-Vedic marriage gets viewed as sacramental, which is a lifelong commitment of a wife and husband. It is the strongest bond between a man and a woman performed in the presence of their parents, relatives, and friends. The bride and groom walk hand in hand around Agni. The bride offers grains in the fire and chants mantras.

This ceremony is performed at the age of 50, in some cases at the age of 60. At the beginning of this ceremony, a man completes his Grahastha Dharma and enters the Vanaprastha Ashram (hermit of the forest). The man withdraws from all worldly activities and prepares to take Sanyas. It is the life of a Vanaprastha.

Before the Hindus leave the body, they get rid of all responsibilities and relationships to awaken and enjoy the eternal truth. A sannyasi gives up the world and lives a life of contemplation and meditation. He lives by charity.

Antiyeshti is the last rite of a person after they die. The majority of religions in the world believe in burying their dead. Hindus believe in burning the dead body after performing certain rituals.  Antiyeshti is the last sacrifice a person undergoes before leaving the present world. The family members of the person who died perform the funeral. Sanatan Dharma believes that the person returns to the five elements of nature after death.