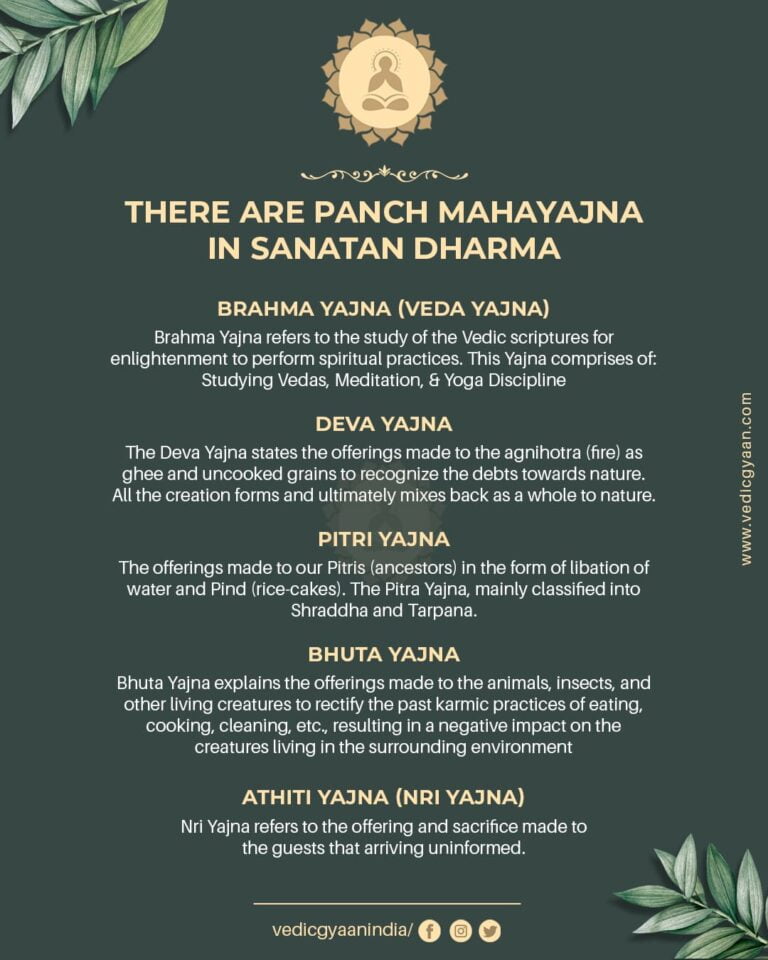 Do you know the meaning of the word Dharma? The word dharma means duty. And, when we say Sanatan Dharma, it means ‘eternal duty.’ Therefore, we feel it is necessary to understand the different duties mentioned in the Vedas. The Vedic principle states that every grihastha (householder) needs to follow five vital duties known as the Panch Mahayajna to attain their maximum capacity and capabilities as a person.

When talking about Panch Mahayajna, the word panch means five, Maha means Main, and Yajna is sacrifice. Yajna is the spine of Sanatan Dharma and requires immense study in different layers of understanding. When broken into sections, the word Panch Mahayajna defines itself. It gets necessary for a householder to perform these five vital duties in their daily life to initiate spiritual evolution and growth.

A spiritual person who offers food as a sacrifice or ritual before eating gets released from all types of sin. However, the one who cooks for their own eats sin.

The Panch Mahayajnas mentioned in the Vedas are as follows:

Brahma Yajna refers to the study of the Vedic scriptures for enlightenment to perform spiritual practices. This Yajna comprises of:

By practicing Brahma Yajna, a person realizes the mightiest one, Brahman. It works to pay debts towards Rishis and Vedas by preaching sacred texts daily.

The Deva Yajna states the offerings made to the agnihotra (fire) as ghee and uncooked grains to recognize the debts towards nature. All the creation forms and ultimately mixes back as a whole to nature.

At the beginning of the creation, Lord Brahma created human beings with some duties and said, “Respect and offer something to the yajnas to achieve all you desire.”

With every sacrifice offered to the celestial body, the planetary gods get pleased, showering bliss to the preacher.

The god, when pleased, offers happiness and blessings, but the one who enjoys what is given by the gods without making sacrifices becomes no less than thieves.

The offerings made to our Pitris (ancestors) in the form of libation of water and Pind (rice-cakes). The Pitra Yajna, mainly classified into Shraddha and Tarpana. Shraddha refers to the practices done to preach the truth. And, Tarpana defines the offerings made to the family line and source of creation and evolution.

Bhuta Yajna explains the offerings made to the animals, insects, and other living creatures to rectify the past karmic practices of eating, cooking, cleaning, etc., resulting in a negative impact on the creatures living in the surrounding environment. This Yajna promotes a good behavioral relationship with the animals, insects, birds, and ghosts deprived and in need of food.

This practice has its mentioning in the Manu Dharma Shastra as:

Gently place a portion of food in the ground for the dogs, birds, wandering outcasts, Svapachas, insects, and all those deprived of food.

Nri Yajna refers to the offering and sacrifice made to the guests that arriving uninformed. Earlier, sanyasis and sages traveled from one place to another to teach spirituality. They visited households, and it was their duty to feed them and offer shelter to rest. The sanyasi, in return, gives knowledge and blessings acquired spiritually.

Mentioning of the Yajnas in the Scriptures

The Yajna (and Panch Mahayajna) practice has its mentions in different scriptures. Some of the various scriptures mention multiple duties of the householders. Also, elaborates the significance of the Yajnas are as follows:

The Manusmriti Dharma Shastra, third discourse, elaborates the duties of the householders from verse 3.67 to verse 3.121.

The Bhagavad Gita, the Karm Yog (Chapter 3), describes the vital duties (Yajna) of a person between verse 8 to verse 21. Also, the Jnana Karm Sanyas Yog (Chapter 4) has mentioned the significance of Yajna from verse 23 to verse 30.