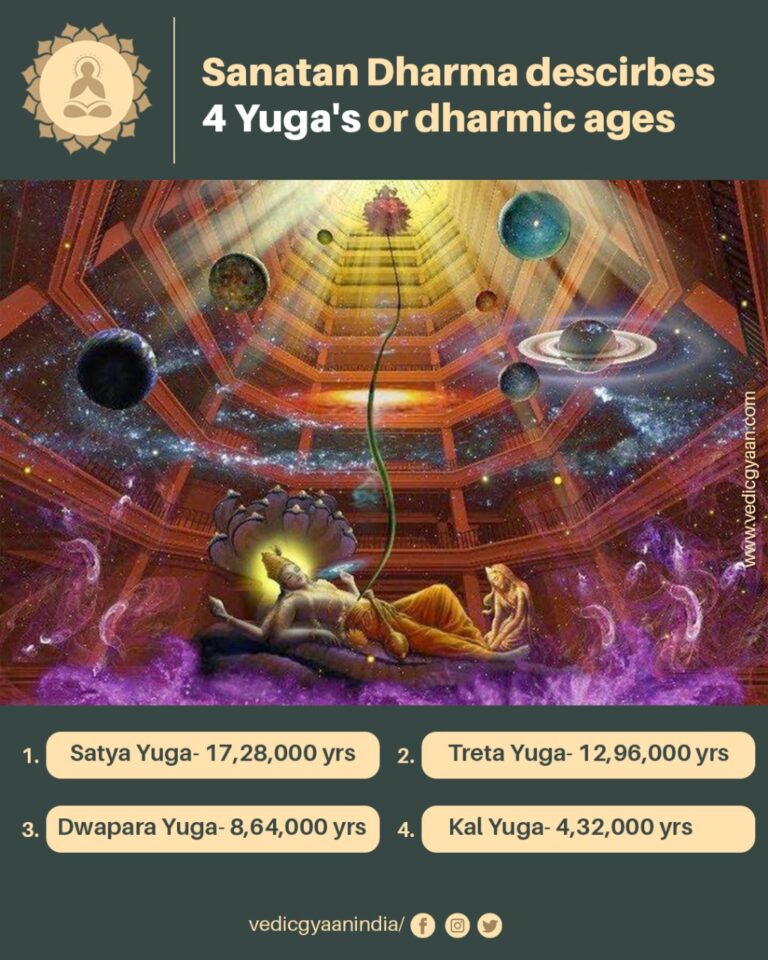 The Hindu Vedic texts and mythologies believe that the present universe destined to pass through four great eras, each of which is a complete cycle of cosmos and destruction.

Hindu mythology deals with large numbers that are impossible to imagine. Hindus believe in the process of creation moves in an ellipse and that each ellipse has four great yugas, or eras, of time. The process of creation is revolutionary and is to be never-ending, it “begins to end and ends to begin.”

A Kalpa said to be constitutes of a thousand cycles of four yugas each having different quality. An estimation, a single yuga cycle is about 4.32 million years, and a Kalpa is to have 4.32 billion years.

About the Four Yugas

Hindus tradition holds three of these great ages of this current universe that have already passed away, and we are now living in the fourth yuga the Kali. It is quite hard to look at the meaning of huge quantities of time expressed, the numbers are quite huge. There are different theories about the meaning of these measurements of time.

Evilness and dishonesty have therefore replaced truth gradually in the last three ages.

Also Read: Why do we Celebrate Guru Purnima?

The four Yugas ages may showcase the four phases of evolution during that humans gradually lose awareness of their inner selves and subtle bodies.

Evilness and dishonesty have therefore replaced truth gradually in the last three ages. Living in the Kali Yug The present yuga we are living in the Kali Yug in a world infested with impurities and vicious circle. People possessing noble virtues are diminishing day by day.

Floods and famine, war and crime, deceit, and duplicity start forming in this age. But, according to the scriptures, it is only in this age critical troubles that final liberation is possible. Kali Yuga constitutes of two parts: In the first part, people lost the knowledge of higher selves, and possess the knowledge of the “breath body” apart from their physical being.

Currently, during the second phase, however, even this knowledge has deserted humanity, excreting only with the awareness of the gross physical body. This is why human specie is no more preoccupied with the physical self than any other ratio to existence.

Due to our pre-occupation with our physical bodies and our lower selves, and we emphasize the pursuit of gross materialism. This age termed as the Age of Darkness an age when we have lost touch to our inner selves, an age of pure ignorance.

According to Hindu texts, at the end of the Kali Yuga, Lord Shiva will destroy the whole universe and the physical body will undergo a great course of transformation. After this dissolution, Lord Brahma will incarnate a new universe, and humans will become the Beings of Truth once again.