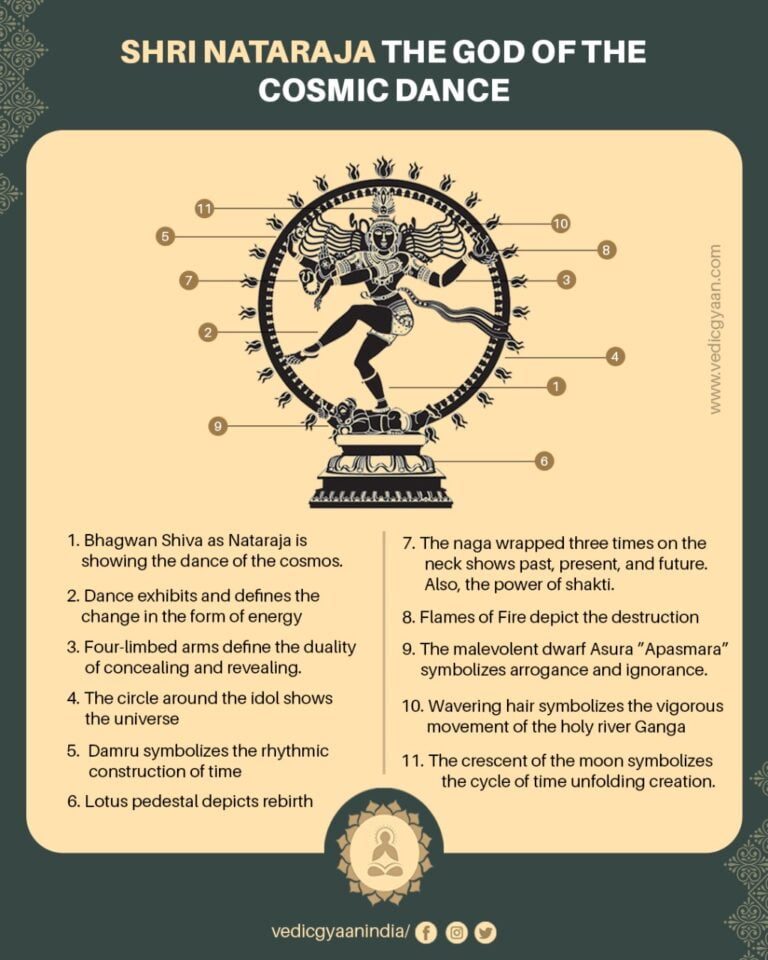 Nataraja: The God of cosmic dance

Dance is present in the cosmic waves. If you look closely at our dharma, you will observe that our gods express a lot through dancing. Dancing has an aspect of creation. Modern science uses different terminologies to define the creation of the universe, saying it looks like a dance. And, you may agree or not, but this is what our gods do, dancing.

If you look at different dance forms of India, you will observe there is not much movement on the surface, but the hands and face have expressions and mudras. However, when you see the dance and its postures closely, you will know that there is a lot more to our classical dance forms. It has more than just movements.

Several questions have arisen in your minds. How is it possible that throwing hands in the air making some mudras can have logic? It can get hard to accept, but it has sense and science associated with it. Many physicists are studying the creation of this universe. Firstly, everything felt sudden and accidental, but gradually the formation discovered had synchronization similar to dance. The making of the universe and dance both have coherence. Without similarities, you cannot have related.

Dance has a significant role in our dharma, and so does the god of Cosmic Dances, “Nataraja.”

Lord Shiva as Nataraja: The god of the cosmic dance

Whether it is a bacteria, a cosmos, a human, or an animal, everything has the same fundamental unit according to the science of constructal theory. With sophistication, they become complicated. The nearest construction of the cosmos is dance. Both at first seem random, but gradually when you pay attention, you can see synchronization.

When we say dance is creation, then the creator becomes a dancer. When you look closely at the statue of Shiva as Nataraja, you will see a circle around him. A circle represents the cosmos. Anything in this universe moves in a form close to a circle, naturally whether it is the planets, atoms, cells, etc. Therefore, Lord Shiva, as Nataraja, is a cosmic dancer.

The story of Nataraja took place at Chidambaram. A group of sages engaged in practicing magic spells and rituals, trying to gain control over gods. They could become a threat to everyone. To end their practice, Lord Shiva disguised himself as a beggar named Bhikshadana with beautiful features. However, he was naked. Lord Vishnu followed him as Mohini, who was love-stricken by Bhikshadana.

The beauty of Bhikshadana had the wives of sages attracted towards him. The Sadhus get annoyed and tried to control Bhikshadan with their powers. However, Lord Shiva being the supreme of all, could not get control with such spells. They intensified their attacks and released vicious serpents on Bhikshadana, which rested on Lord Shiva as ornaments. After snakes, they spelled a tiger that succumbed to death by Bhikshadana to get worn as a loincloth. Later they sent an elephant, but it too died.

The aggression of sages intensified to its extreme. For neutralizing Bhikshadana, sadhus formed Apasmara from the sacrificial fire. Apasmara became the symbol of arrogance and ignorance. Lord Shiva could not kill him to maintain the balance of the world. Without ignorance, anyone can easily attain knowledge and will not realize its importance. Therefore, ignorance has to remain to express the true essence of attainment and enlightenment.

Lord Shiva knew he could not kill Apasmara, but he can suppress him with his powers. The lord climbed on the back of the Asura Apasmara and started performing Tandava. Once Lord Shiva starts dancing, the sadhus realized that he was the supreme Lord Shiva. The divine energy produced during the dance removed the vision of ignorance and enlightened the sadhus.

Significance of the Nataraja form

You can observe the form that Lord Shiva took while suppressing Asura Apasmara with his Tandava in idols. The form taken by Shiva has a great significance stated as follows: