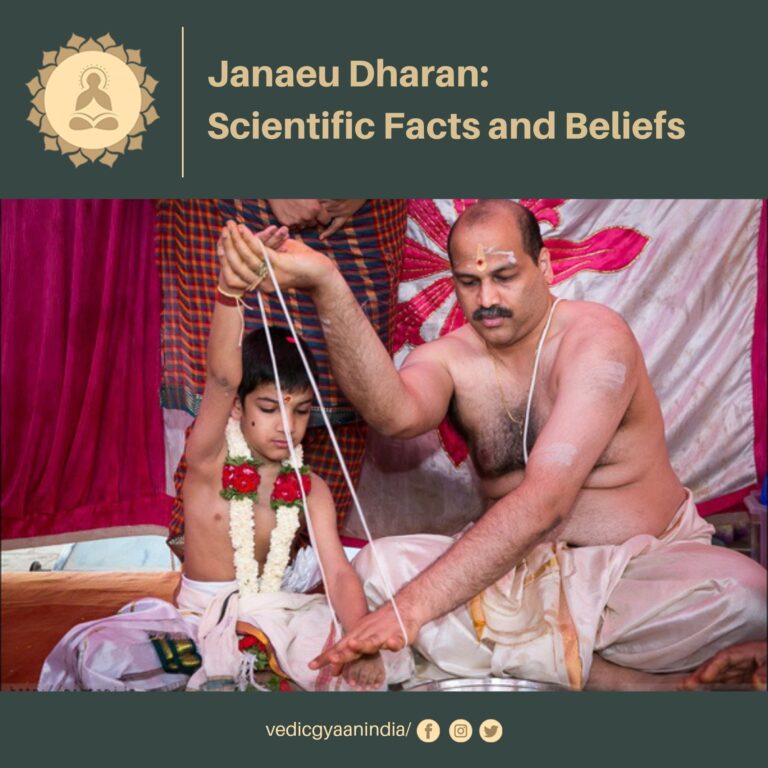 Janaeu Dharan is a custom followed by Brahmins and some Kshatriyas in Hinduism. Janaeu is a sacred white thread worn by a Brahman boy after the age of 12. It holds a deeper meaning in the Vedic scriptures.

Janaeu Dharan is a practice that follows under the sixteen sanskaras of Sanatan Dharma. Wearing a Janaeu is the tenth sanskara followed under the Upanayana Sanskar. Janaeu Dharan is the symbol of a sacred vision straightforward in the direction of doing right.

Many people follow this custom throughout India but are unaware of its scientific benefits.

A Brahmin wearing a Janaeu follows a set of customs and rituals under a guru. A guru is a person who chants mantras to the wearer at the time of Upanayana Sanskara. There are several Vedic beliefs related to wearing a janaeu:

The Gayatri mantra chanted before Janaeu Dharan is as follows:

Why do women not wear Janaeu?

Many liberals often question why women are not forbidden to perform Janaeu Dharan. Sanatan Dharma has not opposed women from wearing Janaeu. The fact that our scriptures have not mentioned Janaeu Dharan for women is because they don’t need one.

Men need to wear a janaeu to perform various rituals to attain spiritual awakening. It is because of their nature and wild practices that they require janaeu to abound. It helps in preventing their minds and body from distractions keeping them focussed on the path of attaining what is right.

On the other hand, women get the same benefits without wearing a janaeu because they are said to be more mature and mindful. They can indulge themselves on the path of attaining righteousness with not many efforts. It is for this reason that Vedic scriptures describe women as “Stree Sadhu.”

Another question that may arise is why other varnas do not wear a janaeu particular Shrudas? There is a quote from the Vedas:

The above quote means that women, Shrudas and Kali Yuga are all holy. The Kali Yuga is said to be the best yuga for a child to be born. Those who are born in this era get a spiritual awakening even after doing less good in their lives.

The woman bounded with the duties of her family with others related to her. Her sacrifices and duties show her selflessness. Hence, she does not require janaeu to attaining spirituality. Lastly, a Shrudra works rigorously in performing deeds that benefit others even when considered filthy. Their day-to-day deed is sufficient for them to attain spiritual well being.