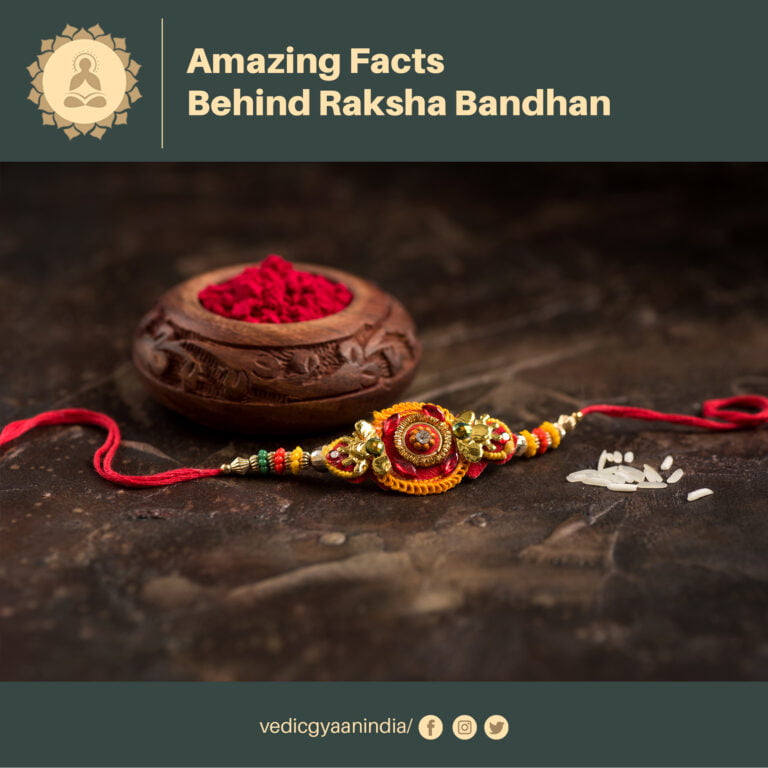 Raksha Bandhan is an auspicious festival celebrated throughout India. This festival focusses on the pure bond that a brother shares with her sister. There are many mythological and historical tales associated with this festival. Celebrated on Purnima or full moon day in the month of Shravan, also known as Sawan.

The festival is not only celebrated to symbolize biological relationships but also expresses the bond shared on an emotional level. Thus, it is a festival of love and prosperity. Raksha Bandhan has more to its root than a religious celebration.

According to Vedic Science, Raksha Bandhan shares some health benefits to our body. The rakhi tied on the wrist creates acupressure on our nerves. Creating friction to our subtle channels, Vata, Pitta, and Kapha are cleaned from the body in this process.

The tilak is applied to the center of the forehead, between the eyebrows. This point also symbolizes the third Chakra in the human body. It holds the major center of energy. Applying tilak resists the loss of energy from the human body and an absorber of energy to restrict any further loss. This also determines the blood flow of the face muscles.

The story behind the origin of Raksha Bandhan

According to Bhagwad Gita and Vishnu Purana, Noble Asura king Bali was defeated by the Vaman Avtar of Lord Vishnu. After his defeat, King Bali requests lord Vishnu to live in his Palace. As a result, Vainkuntha was devoid of the Lord. Goddess Lakshmi was not happy with this agreement and become restless. She descended on earth as a brahmin woman in an attempt to bring back lord Vishnu. She told Bali, that her husband has gone away for a long errand and she needed a place to stay. King Bali welcomed her full heartedly and protected her as his sister.

Finally, on the day of Purnima in the month of Shravana, Goddess Lakshmi tied a thread (Rakhi) on Bali’s wrist and prayed for her protection and happiness. In return, Bali granted her a wish to ask for anything. Immediately, Goddess Lakshmi revealed her identity and asked for the return of Lord Vishnu to Vaikuntha.

To commemorate Bali’s devotion towards the Lord Vishnu and Goddess Lakshmi as his sister, this festival is also known as Baleva. Since then, brothers all over the world started following the tradition of inviting their sisters for tying the thread of love and celebrate Raksha Bandhan.

Once, Yudhishthira undertook the Rajasuya Yajna in which lord Krishna used Sudharshan Chakra to punish Shishupala for his numerous sins. During the act of hurling the Sudharshan Charka from his index finger, Krishna hurt himself. Draupadi saw this and immediately rushed to help her lord. She tore off a piece from her sari and wrapped it around his finger, stopping the bleeding. Krishna touched by her gesture of devotion and pure love.

He asked her what would she like in return for this favor. Draupadi, like a true sister, just asked for the Lord’s holy presence in her life forever. From that moment onwards, Lord Krishna has been with Draupadi like a shadow protecting her from every small and big trouble. When the Kauravas tried to dishonor Draupadi through “Cheer Haran” after Pandavas lost to Kauravas in the game of Chausar, Draupadi prayed to Krishna continuously. The Lord protected her and punished the sinners during the battle of Mahabharata.

Since then, the festival of Rakhi is celebrated as a gesture of love between the brother and sisters around the world.