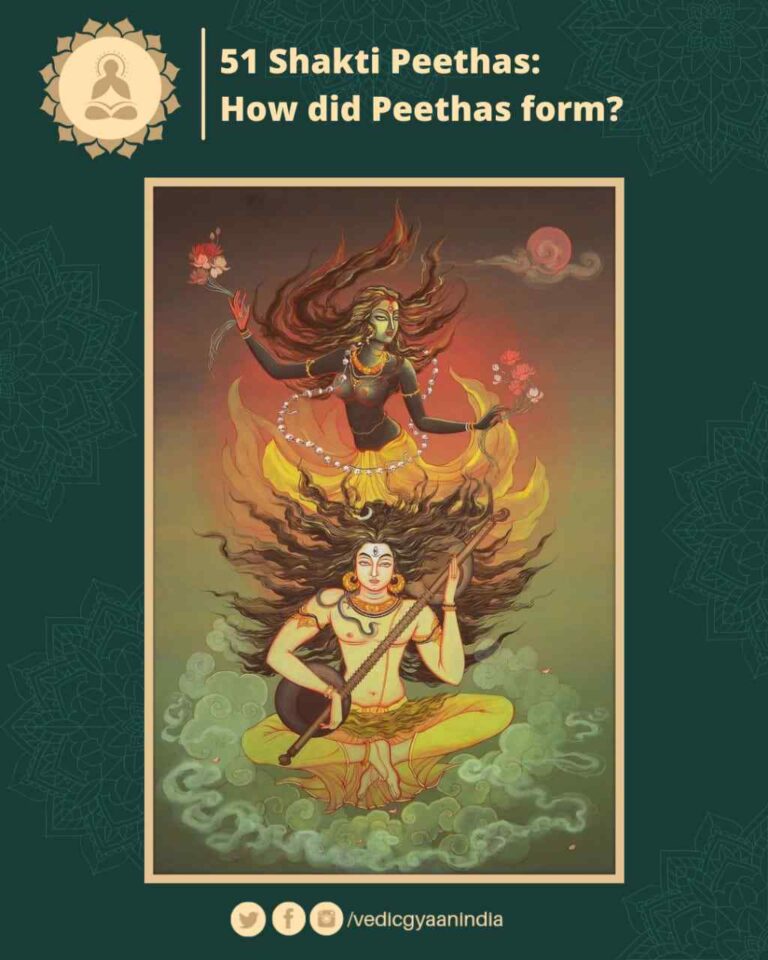 Shakti Peethas: Everyone is familiar with Shiva Shakti, but do you know the vital manifestation of shakti? What are Shakti Peethas? Sati, Durga, the goddess who defines shakti. Sati is the Adi Shakti of Lord Shiva. Further, there are three supreme incarnations of Sati Mata, which are Gauri, Mahakali, and Durga.

Sati, the daughter of King Daksha (one of the ten Manas Putra of Brahma), fell in love with Lord Shiva and wanted to marry him. However, King Daksha Prajapati was against this marriage. He considered Lord Shiva as an Aghori and denied accepting him as a god.

Even after King Daksha refused to marry her daughter with Lord Shiva, Sati Mata married him. In his anger, King Daksha disowned Sati Mata. Once King Daksha decided to conduct a maha Yagna in his kingdom and invited all the gods and goddesses except Lord Shiva. Further, when Sati Mata knows about the Yagna and the invitations, she was angry and thought it was disrespectful to her husband.

Sati Mata went to the venue where the Maha Yagna was going on. She was furious and wanted King Daksha to answer her questions. King Daksha disrespected her in front of everyone present there. Sati Mata, in her grief, requested Lord Agni to burn her alive. Lord Agni clarified by saying he was incapable of burning Sati Mata (Shakti). Moreover, Agni Dev added that Shakti resides in Lord Shiva, Lord Brahma, and Lord Vishnu. Even if he would try, he was incapable of burning her.

Sati Mata of her grievance created her fire from within and burned herself. Lord Shiva was unable to bear the loss of her beloved wife and punished King Daksha. Later, he carried the dead body of Sati Mata on his shoulder for years.

Everyone became tensed because Lord Shiva is the creator of the universe, and his grief could disturb the balance of the universe. All the gods went to Lord Vishnu for a solution. They insisted him to talk to Lord Shiva. But, Lord Shiva was not ready to listen. Therefore, Lord Vishnu chopped pieces of Sati Mata’s dead body, scattering them on the earth with his Sudarshan Chakra. These pieces of Sati Mata’s body are now called Shakti Peethas.

Where are the 51 Shakti Peethas?

There are four Adi-Shakti Peethas mentioned in Kalika Purana:

Tara, Tarini Sthana Peetha: Tarini Shakti Peetha is one of the four Adi-Shakti Peetha and has its location in Orissa on the banks of Rushikulya river in Behrampur, India.

Kamakhya Shakti Peetha: Kamakhya temple is the main temple among the four Adi- Shakti Peethas. Situated in Guwahati, India, Kamkhya Devi Temple is one of the major temples to worship Goddesses.

Kalighat Kalika Shakti Peetha: Located in West Bengal, India is visited by thousands of devotees every year from throughout the world.

Shakti Peethas other than Adi-Shakti